How to get here

(pron: roo-wen-zor-ee) Ruwenzori, also known as the “Mountains of the Moon”, is a group of six high glaciated mountains, located in a small remote area on the border between Uganda and Zaire. Our property was named after them by a friend who grew up there and remarked upon the similarity in the landscape to Mudgee (no glaciers, however!)

How it all began

The McGregor family purchased the property in 1979 after the original Wyaldra Park property was subdivided into 25 acre blocks. The heavily timbered granite mountain area was left largely unused by the graziers except for the odd rogue sheep and was known by the local grazier as ‘Seldom’ (for his infrequent forays into the area).

In 1980 after a massive bushfire decimated the native vegetation, the ridge top where the train now rests was revealed and Scott McGregor decided it was a great spot for a weekender. The flag was raised at dawn on the summer equinox 22nd December 1980 (it was also a full moon). The name Ruwenzori came via a friend who remarked on the similarity of the country to his birthplace – the Ruwenzori Mountains in Central Africa – also know as the “Mountains of the Moon”. 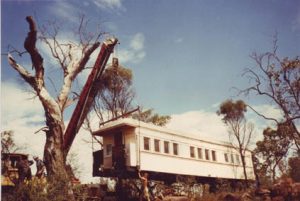 Exactly a year to the day later the double arm timber signal was raised and apart from the access road and the flagpole it was the first structure at Ruwenzori Mountain. Being a starving actor Scott was looking for a cheap form of accommodation to put on the property, and being an avid rail enthusiast was aware that the NSW government was getting rid of a lot of their rolling stock at bargain basement prices.  On the 25/1/1982 the first carriage arrived – now called  “The “Dining Car” – it was originally a first class sitting car on the NSW railways. Built by John Morrison & Co. car builders at Strathfield of  teak, cedar, and pitch pine and first run in December 1890, it traveled over a million miles in the Sydney metro area before it was converted for railway workers as a Camp Van in 1947. It spent most of its workman’s van days on the north coast line and was condemned in 1981.

The next carriage to be bought in was the old Guards Van, located near the Station Building which was craned into place on the 13th. September 1983. This old composite passenger and Guards Van was built in the early 1880’s and became the first workshop/ storage facility at Ruwenzori. Ten days  and about 160 feet of track later the Caboose was loaded into it’s position on the branch line. Originally a coalfields brake Van, build around 1910, the Caboose was bought from Orange where it was used as a shunting vehicle. It is the only item of rolling stock that can be moved, and is moved along it’s line from time to time.

On the 6th. January 1984 the Sleeping/State car was craned into position. The “TAM” sleeping car was the pride of the NSW railways passenger fleet. There were 50 of these carriages built between 1913 and 1927. They had 20 sleeping births and accommodation for an attendant and with their rich cedar paneling, silver wash basins, decorative fittings and very smooth ride they were a popular and long running vehicle on the states ‘mail’ and express trains. TAM  638, now restored at Ruwenzori as the State Car, was one of the last of the TAM’s built in 1927 by Meadowbank Manufacturing Co. It was last run in 1974 and ended its days as a workman’s van where it was extensively remodeled (with a chain saw) and ultimately condemned in 1981. 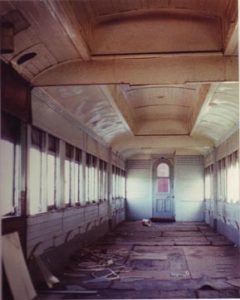 In September 1984 “Operation H2O” was completed with the craning into position of the small water tanker car at the end of the State Car. It coincided with the erection of the windmill, the water tower, associated plumbing, garden irrigation systems, and the bathroom inside the State Car. The connection of 12Volt solar power happened shortly afterwards, and internal restorations of carriages and external landscaping began in earnest.

People are always astonished at how the carriages came to be perched upon this hill without a rail link for many kilometers…the carriages have been brought on the back of large semi trailer trucks and craned from them into position.

In January 1987 the Verandah connecting the two main living carriages was built along with the ‘Sunken Garden”.  In the summer of 1989 the Station building was built using many original architectural features reclaimed from demolished stations and the local locomotive depot. The renowned actor David Nettheim opened it with much fanfare on the 25th March 1989.

On the 1st. December 1990 the Pullman car was loaded into its position along with the old Louver Van. This marked 10 years since the flag was first raised on the mountain and it also marked the first year of the operation of  OFF THE RAILS , Scott McGregor’s railway related furniture and memorabilia business which had its inception at and derives it’s inspiration from the Ruwenzori  collection.

The 1990’s saw the continued consolidation of the complex with detailed internal restorations and external landscaping projects. The addition of the Wiring Van  and its storage shed happened in 1992 as a facility for OFF THE RAILS. The larger water gin and the little Signal box (originally a weighbridge shed) were trucked in.  Increased water capacity was added in 1995 and in 1998 the main power was connected and the land area was increased by the addition of another 25 blocks, ‘Habanat’, on the eastern side of the present land.

Ruwenzori is the kind of project that will never be finished and is constantly evolving, and the ‘Retreat’ is the next stage in its colorful history.  Many of our friends and family have enjoyed Ruwenzori over the years, and we are now sharing it with a larger audience!

Stay up to date with our special offers